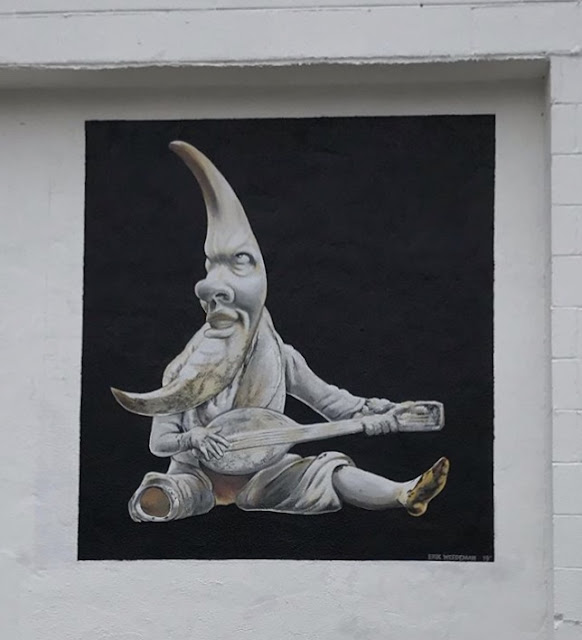 My latest mural is a 6'x6' hand painted image of the "Moon Man" Sculpture. Located at the corner of Columbia and Delaware Avenues in the Fishtown neighborhood of Philadelphia, PA. This commissioned mural is for the Penn Treaty Archaeology Center, which showcases some of the cities historic artifacts discovered over the years during multiple archaeological digs. Especially artifacts found along the banks of the Delaware River in the river ward neighborhoods such as Northern Liberties, Fishtown, and Kensington. The center has multiple archeologists working on some of the  most recent artifacts that have continued to be found while construction crews rebuild I-95. Some of the items at the center are ancient Native American and colonial era clothes, jewelry, shoes, household items, cooking and fishing tools, as well as the "Moon Man" sculpture. This porcelain sculpture dates back to the late 19th century and measures roughly 6-8" tall. This tiny piece of art has survived decades and has held up pretty good with the exception of a missing right leg. It is the centers prized find and I had the honor of painting this figurine on the wall of the main entrance. Come and visit the Penn Treaty Archaeology Center and learn a little history and take in the views of the mural next time you are in the Fishtown neighborhood or heading over to Penn Treaty Park (which is directly across Delaware Ave.)
Home